So much has happened since I began moving my old WordPress page over. That’s not fun at all, by the way! Between everything else it’s taken me months to finish fixing all of the links, images, etc. Blarg. But, now it’s done so I can finally post an updated post or 2 before the New Year really gets going. 🙂 A few other big things happened that caused delays in the posts, you’ll read about those as they come up. 🙂

We left off right as we were heading out of town for vacation. We also had an exciting July 4th, as the teen setting off the fireworks in a friend’s yard ended up setting one up that tipped over and shot fireworks directly into the crowd. We had to leave right away…one exploded at my feet right as I ducked down…towards my feet…from a flying rocket. So, after having a explosive ordinance explode in my face I was in no shape to stay any longer for the rest of the party. That took a few days of recovery.

Coincidentally, July 5th was the last day of real rain until 11/28. More to come on that tidbit later, in November, when the full impact of that teensy tiny fact is felt.

Right before we headed out, to go on our amazing vacation, we pickled the last remaining cucumbers so they wouldn’t spoil while we were gone. 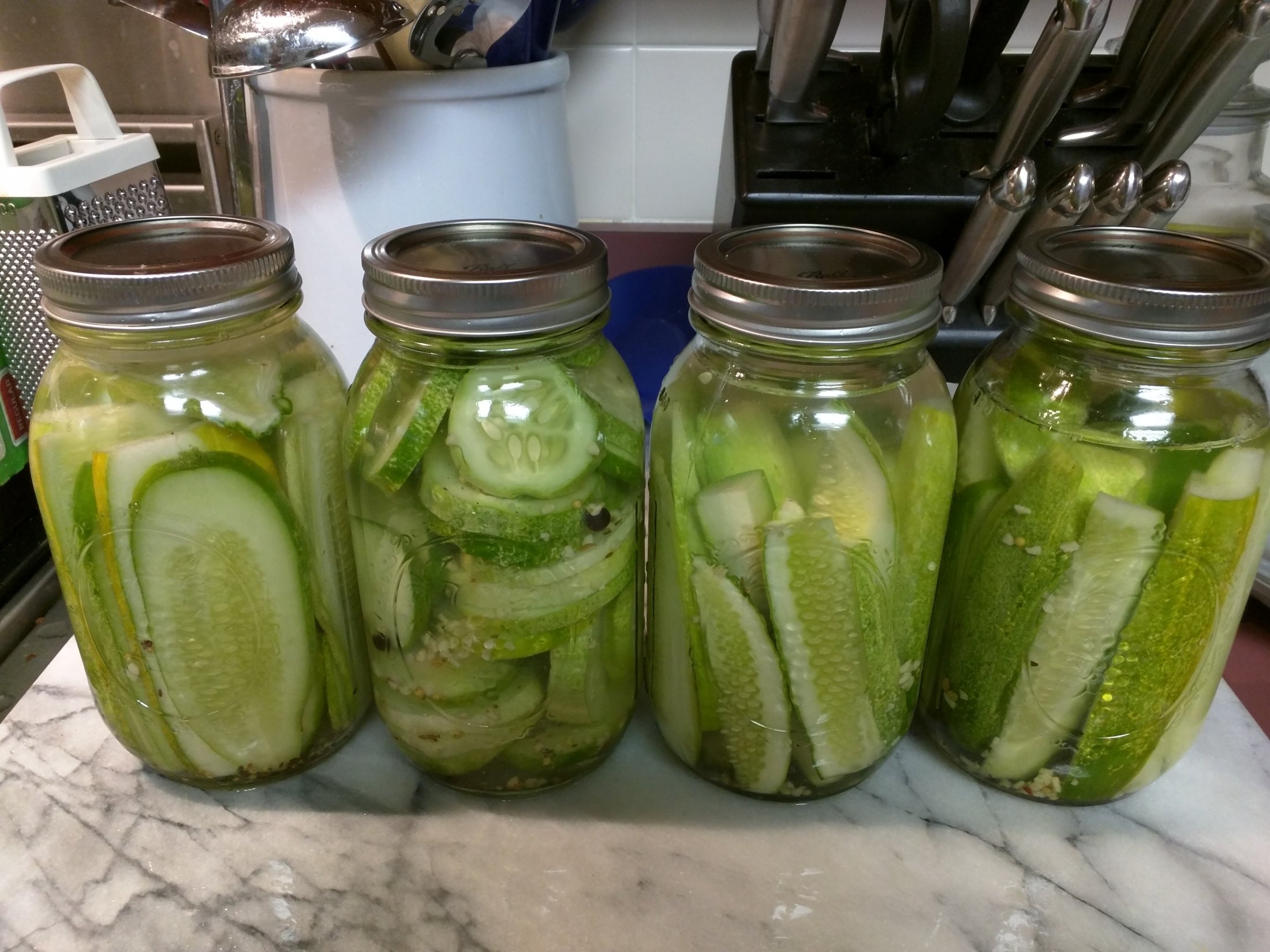 We had a magnificent vacation at the cabin!

As is the custom, our regularly scheduled “walkthrough” of the Farm the moment we returned. We also checked on the bees immediately after these photos and before even going upstairs. We learned, the hard way, that the bees didn’t like this. We each had a few stings due to our careless enthusiasm without enough smoke. No photos of us getting stung, unfortunatly. I hear that I did a great boogie-woogie as I quickly made my way indoors. lol!

Unfortunately, I hadn’t learned the meaning of the term “moderation” as well as I have now. The day after we returned from vacation, I spent 10 hours in the full sun in over 100 degree temperature trying to “catch up” on the weeds and mulching the front herb garden. That very evening, I had the absolute “joy” of visiting our lovely emergency establishment to have them pump me full of saline so I didn’t die. Heat stroke. It’s a thing. :'( Heat is bad, mmmkay.

Some more stuff that we did in July…albeit MUCH more slowly than normal since I couldn’t function in even moderate heat for more than a few minutes at a time. That lasted for a few months. :'(

Kevin began prepping the overgrown, spent garden for a 2nd round of crops.

By month’s end we noticed we had to water more than normal since so many plants were starting to show signs of suffering. That’s odd. Hmmm. Ok. We’ll set the timers to water twice a day.

Holy smokes, it’s been crazy!  Ok, so, I wrapped this weekend around all the way to the 5th since it was the holiday and birthday weekend farming extravaganza.  LOL  Lots of work!

I’ll just do before and after pictures.  It’s been amazing!  I’ve loved nearly every minute of it.  🙂

Um, I might have planted some overly large sunflowers.  LOL!  They are already bigger than me!  They are supposed to have flower heads at least 18″ across.  But, we’ll have lots of sunflower seeds to eat!  🙂  (This after just 5 days from the previous picture where they were barely up to my chest.)

Yeah, I know.  Amazing difference from the week earlier!  Everything is doing this weird thing and GROWING!!!!!  It’s just like Bug….she won’t stop growing even when I tell her to STAWP!  LOL!

It’s still so hot at 9pm that the bees are bearding.  Next week we’ll have to syrup them to start prepping for the summer wind-down.  We still have TONS of flowers and they are nearly living in the melon patch, but to be safe we are going to feed them before it gets much later.  🙂

The gazebo!  🙂   I LOVE it!  We’re going to have to move it a little closer to the house but it’s up and looking beautiful!  🙂  Now to fill the barrels, hang the strawberries, and put the solar lights out!  Then fill it with furniture!  🙂

A early version of logo for Kevin.  We still need a good tagline for his blog.  He’s come up with a few but I’m not quite sure about them.  They’re all a bit double-entendre-y!  LOL!

Ok, let’s see.  The pics as of this morning (7/5, because I’m a lazy bum and went to birthday dinner Sunday night and to watch fireworks last night instead of blogging!)….

The big garden patch is a bit weedy.  So, we’re starting to put down cardboard and newspaper to kill off the bit between the rows.  That should make it easier to prune and weed within the actual veggie/fruit rows.

We also put in more seed potatoes.  There are apparently two schools of thought with the potato boxes.  The first is to bury the plants once they reach 12 inches tall and only allow the top third of the plant to be exposed.  The second is to only bury the bottom 4 inches of the 12 inch exposed plant.  We buried them the first way…..we’re guessing the second way is the correct way.  LOL!!!!!!!

My little flower gate is actually doing quite well.  I don’t know much about zinnias but it looks like a couple of them are “done”.  I guess I should read about that.  LOL!  I’ve only been reading about stuff we can eat, so the flowers are really a completely backburner project and are only planted because a client gave me a ton of them to plant.

I tried to catch a picture of the teeny song bird in the front path but none of them really came out.  So, here is the front path.  🙂  The cilantro is flowering into “coriander”.  The rest of the herbs are looking pretty good.  There are a ton of beautiful green weeds.  LOL!!!!  But, really, the strawberries, lavender, and blackberries are all buried in those weeds so we have to cardboard and mulch this coming week.  🙂

Foodscaping in stages!  🙂  Apparently plants don’t want you to just drop them into huge pots or out into the hard clay right off the bat, they like to be wined and dined and “pot-bound” into gradually staged larger pots.  So, tiny pot -> slightly less tiny pot -> almost small pot -> small pot………ad nauseam.  LOL!  So, foodscaping is mostly a container garden until things are established enough to plant the perennials.  🙂  The “hooks” are just resting there holding a few strawberries in the sprinkler’s path until we have the gazebo barrels settled.  🙂   The larger pots have multiple seedlings in them and will be slowly re-potted to their individual pots once they’re bigger.  Hopefully in just another week or two.  🙂   I can’t WAIT!  🙂

The gazebo’s new home!  🙂  I hated to move it so far into the yard, but it’s still shaded AND allows more sun for the solar features.  🙂  There are lanterns and there will be a solar powered outdoor ceiling fan.  I’m trying to convince Kevin to let me have another koi pond over here….bigger….with solar powered pumps, etc.  🙂

Orchard Row is all doing very well and super healthy!  🙂   Holy smokes we have to mow AGAIN!  We JUST mowed!  And we’re not using fertilizer or anything!  Ugh!

SQUEEEEEEEE, a baby pumpkin!  It’s bigger than my hands!

Um, we might be in trouble with all of these pumpkin and melon flowers!  lol  Like I said, the bees are in here so much it’s hard to look to find the stuff to harvest!

There are tons of mushrooms in the garden patch.  I read that it’s good luck and means the soil is doing well.  I really hope it’s true!  I’m hoping it doesn’t mean that the soil is “poop” and mushy.  LOL!!!  🙂

Another basket of “harvest”.  Apparently I already pulled the zucchini and cucumbers out of this basket before taking the picture.  LOL.  I must have had Bug take them upstairs without paying attention.  🙂  There are 3 baby pumpkins.  They’ll go to compost with the oversized radishes since they were “pruned” out.  Oh my word we have so much more pruning to do!  🙂

The seedling area is almost entirely planted.  🙂  These are the last few things that we’re seeding in the effort to replace those that didn’t germinate in the garden or grow a few more things for the bees (honeysuckle and bee balm).  🙂

Citrus Plaza is a bit overrun with additional temporary offerings.  🙂  New seedlings and stuff that needed regular sprinkler-ing.  LOL!  Everything up here is doing so great!  I’m so happy with the tropical and Mediterranean trees!  🙂  Also added, four boxes of tomatoes (to be close to the back door, which is the kitchen!) and more strawberries.  🙂   After the downpour we had a few of the pots fill with water so I had to punch a few more drain holes.  Hopefully they won’t clog, otherwise it will be re-potting day sooner than expected.  LOL!  The lemons and limes already outgrew their TEENSY pots, so they got put into 9″ pots.  Hopefully they won’t get transplant shock.

Ok, so, today……I didn’t farm.  I mean, I snagged a few cucumbers and checked for zucchini’s and snapped pictures, but that’s it.  Wait….it’s our first day without zucchini’s.  Hmmmmmmmmmmm.  Anyway, I came home early from work to take Munchie to get his driver’s license.  Yikes!  He passed…he’s a great driver…but now I have another mommy-worry!  *sad face*  And he tested in a torrential downpour.  I had to snap several pictures just to get one where my camera didn’t distort the photo trying to “auto-focus” on the rain.  LOL!

And with that it’s bedtime.  I bid you a tearful adieu.